Escape to a tropical paradise. Mozambique beaches will refresh you after an invigorating safari. Whether you wish to add a stay in Mozambique to a longer African safari or want to make the country your sole destination, we offer these sample itineraries to get your creative juices flowing. Let Ujuzi African Travel work with you to create a custom Mozambique travel plan that suits your dreams! A dolphin swims near Bazaruto Island in Mozambique.

The waving palms of Wimbe Beach will welcome you to Mozambique, beckoning you to recharge in clear waters after your international flight. Following a day of relaxation, you will set out for Niassa National Reserve, an oasis of wilderness that characterizes the African interior. Home to endemic Niassa wildebeests, Boehm’s zebras, and Johnston’s impalas, Niassa is also a wonderful place to see elephants, sable antelopes, and Cape buffalos—each of which have populations numbering in the thousands.

Then enjoy an ocean safari on a secluded island in the Quirimbas Archipelago, just off Mozambique’s northern coast. Canoe alongside dolphins, dive among angelfish and anemones, or let the wildlife come to you in the form of migrating sea turtles and wandering albatrosses as you laze on the white sands that make Mozambique beaches famous. A dhow ferries passengers from Inhambane to Maxixe in Mozambique. Photo by Steven G. Johnson.

Extend any safari with three to seven days enjoying the waters and lands around Mozambique Island, off the mainland coast in the Indian Ocean. Also known as Ilha de Moçambique, this coral island has a rich history as the country’s former capital—and it holds an equal wealth of natural attractions.

Whale watching hits its peak each August through November, while snorkeling and scuba diving bring delightful discoveries year-round. Both hard and soft corals abound here, as well as a plethora of dolphins and polychromatic fish. Canoeing at high tide is an ideal way to encounter mangrove crabs, birds—Mozambique boasts 740 species—and a plenitude of other shore animals.

Tour the centuries-old Portuguese buildings of Ilha de Moçambique and remnants of Arab settlements. Learn how to sail the Mozambican dhow or prepare traditional dishes. Visit a local community and, if you dare, sample the local delicacy: sea urchins covered in sharp spines. 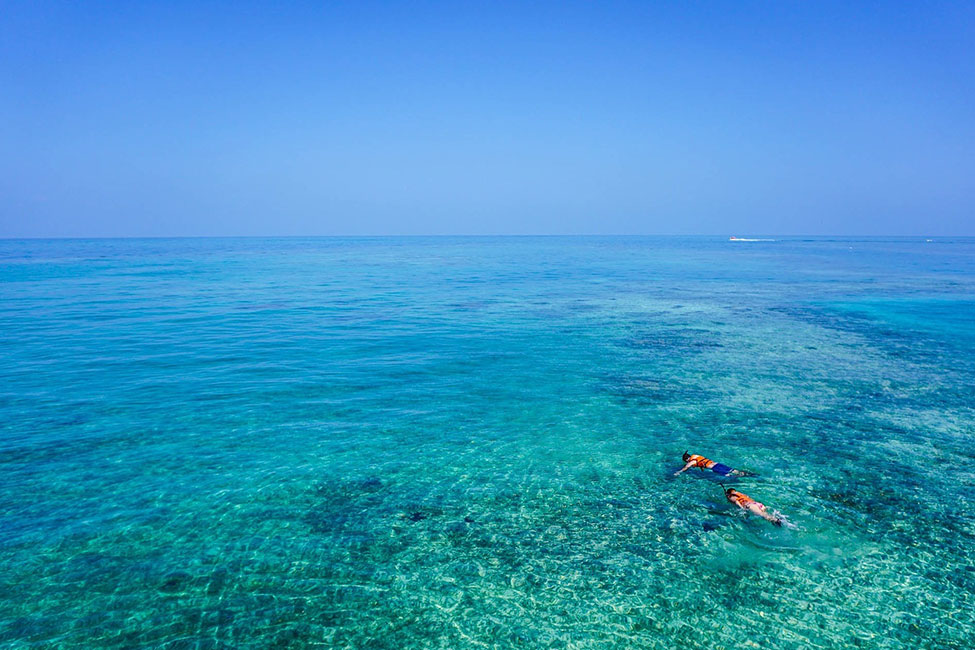 Snorkelers explore the pristine waters of the Machangulo Peninsula in Mozambique.

Explore by foot, kayak, snorkel, or game vehicle. Multiple marine and nature reserves offer unlimited opportunities for discovery, from big game (elephants, anyone?) to diminutive kingfishers and coral reef fish that could fit in the palm of your hand.

Let these photos whet your appetite for Mozambique travel!